Why Solvent Recycling is Considered the Best Alternative to Solvent Disposal 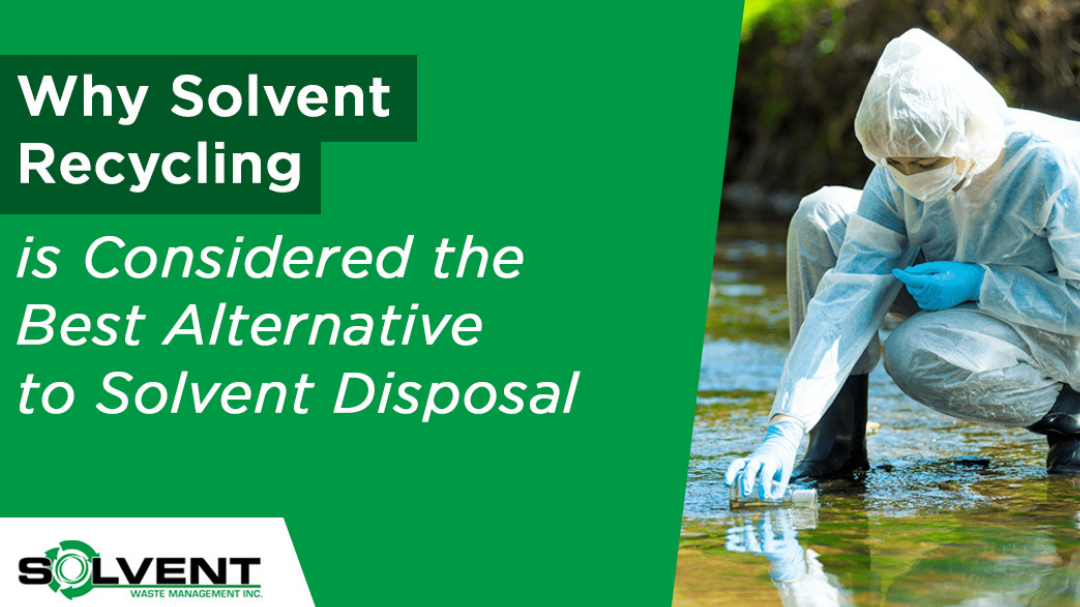 Why Solvent Recycling is Considered the Best Alternative to Solvent Disposal

To make the world a better place, everyone has to pitch in. That includes engineers designing products and processes, purchasing departments sourcing resources, and environmental departments looking for greener treatment and disposal options.

The world is changing course – and your business can too, one solvent washer at a time. Here at Solvent Washer, we keep the environment in mind with every product, service and solution we offer. As a full-service partner with decades of experience, we’re committed to providing the best possible results for your facility’s needs, while being responsible stewards of our shared resources.

A solvent recovery unit collects, concentrates and recycles solvents, biocides and other hazardous or difficult-to-dispose liquids, enabling you to reuse paint thinners, solvents and waste oils, including green-labelled ones. It helps to extend the life of your existing tanks, reduces storage spaces for hazardous waste and offers protection of the environment by reusing waste fluids.

Solvent recycling of used solvent is the first step towards a more circular economy and recycling on a large scale. A cleaning and disinfection process based on solvent technology, it enables the reuse of these plastics by making them completely free from the residues of chemical agents that can damage or kill cells, damaging their normal functions or causing injuries. This new generation of solvent washers for end-of-life (EOL) plastics will play a crucial role as part of sustainable development strategies.

We need to work together to re-envision the way we engineer and create products to ensure they become a valuable resource instead of a waste stream.

Recycling is not new; companies have been recycling solvents since before EPA regulations came into effect. While regulations for managing waste have evolved, recycling has ebbed and flowed as a viable option to manufacturers.

You’re not just wasting solvent when you discard it after a single use; if you’re not recycling it, you’re literally throwing money away.

What are Organic Solvents?

Plastics represent an emerging area of material science. Manufacturers use organic solvents in the production of plastics to dissolve polymers and achieve desirable viscosities.

There are few substances as vital and versatile as organic solvents and a large variety of applications require solvent based products. Organic solvents are used in almost every industry.

Organic solvents are substances with a low degree of volatility and they play an important role in many manufacturing processes. But with the levels of production and manufacturing increasing almost daily all around the globe, how sustainable is constant production if it continues to produce an endless stream of waste?

Did you know that water is the most common solvent on earth? If your mind is stuck in manufacturing mode and all you are thinking about is the latest chemistry developments then this might come as some type of surprise.

But then where does the organic part come in? Well, in order for a substance to be an ‘organic solvent’, then it needs to have carbon as part of its chemical composition. That’s all. Does it matter so much to you? Well, that depends on what your company does with organic solvents and how involved you are with the manufacturing or production process.

Either way, you’re here to find out how your company can benefit from solvent recycling instead of solvent disposal.

So, we know that solvent recycling is the better alternative to solvent disposal- but why?

Waste solvent recycling is the superior alternative to simply disposing of solvent waste, and there are several reasons for this:

Now, the first three benefits may seem fairly obvious to you and your company.

Solvent recycling is more cost effective because your company will cut down on the amount of virgin solvent needed to be purchased. Your company will also save on waste disposal costs as well as virgin solvent delivery costs. Sure, some may argue that the cost of a solvent recycling machine can be high but if you examine the figures you see that the machine will pay for itself in a matter of months.

Read out our Ultimate Guide to Increase Solvent Recovery to 90%

Better for the Environment

The second reason solvent recycling is better than solvent disposal is the environmental factor that comes into play.

It’s pretty obvious and does not require too much explanation: the amount of waste produced and disposed will be significantly reduced. Instead of sending 2 tonnes of waste per week to the landfill, for example, your company will be able to reclaim and reuse 90% of that. This may be an overly simplistic example, but you get the picture. And yes, sure, not all companies can save 90% of their spent solvent, but reading this guide on boosting solvent reclamation to over 90% could help your company reach that point. Either way, any cut back on waste production will help your company to minimise its environmental impact.

If solvents are not recycled and repurposed, they are disposed of- and while it seems too easy to contact a waste removal company to transport spent solvents, what happens when they leave your facility? Most of the time, they are disposed of in a way that has an adverse effect on the environment.

The third reason solvent recycling is superior to solvent disposal might not be the most moral reason, but it plays an important role nonetheless. In today’s industries and IoT where society can access information at the touch of a screen, companies are coming under increasing pressure to meet moral standards.

Companies who take initiatives (and not just marketing slogans) to reduce their impact on the environment will become increasingly more popular than counterparts who continue to sludge ahead leaving a negative wake of environment impacts.

By reducing the amount of waste disposed of, and making better use of specifically designed technologies to recycle solvents, companies can add their green deeds to their brand image. Sure, solvent waste collection will not be totally eradicated, but if a company can market that they repurpose up to 90% of their spent solvents, that adds quite a hefty punch to their brand image– especially in a society where environmental pressure keeps building.

The fourth reason recycling solvents rather than disposing of them is the lesser known factor of boosting your company’s consistency. How can, say, an alcohol recycling system be better for consistency than disposal? Well, we’ve already covered the fact that repurposing spent solvents will reduce the overall amount of virgin solvent your company will need to purchase. And when a company purchases virgin solvent, there is always a strong possibility that the virgin solvent becomes contaminated during the transportation process.

When you rely heavily on your in-facily solvent recycling, you know exactly what solvent is being used, because you have the recycling machine to ensure your solvent is being recycled and reused in the exact way your facility needs it. This means less stress on your machines, and your products can be relied on for constant consistency.

Many industry leaders want to be equipped with as much knowledge about solvent recycling and solvent repurposing as possible. For this reason, we’ve put together a handy FAQ, and if you have any more questions feel free to reach out to the Solvent Washer team.

Question: What is Solvent Distillation?

Q: How to Dispose of Organic Solvents?

Q: Is Acetone Disposal in the Lab a Viable Option?

Q: What is Halogenated Solvent Waste?

Q: Is Methanol a Green Solvent?

Answer: A green solvent is considered an environmentally safe solvent and methanol is regarded as a green solvent.

Q: How to Dispose of Chloroform in the Lab?

Answer: Chloroform waste should never be disposed of down the drain. When in the lab, chloroform should be placed in the appropriate waste containers and disposed of as hazardous waste.

Q: How do you Dispose Acetone?

Answer: Acetone should be disposed of as hazardous waste and never poured down the drain.

Q: How to Dispose of Toluene?

Answer: The best way to dispose of Toluene is to recycle it using a solvent recycling system.

Now that you know the main reasons repurposing spent solvents is the smarter option instead of disposing of spent solvents, you know what you need to do– find out exactly which solvent washer fits your company’s needs the best. Use our ROI tool to find out exactly what machine will be most beneficial to your facility, and contact our team to start repurposing solvents today.